At the five-year average rate of home completion and household formation, the gap would only widen.

If instead household formations sustain the sluggishness of 2021 and home completions continue to be strong, it will only take double the rate of home completions (as assessed in 2021) to close the gap in 5-6 years.

Builders are ramping up most in the south and west:

Through June 2021, 13.8% of all building permits were granted in Dallas, Houston and Austin, Texas metro areas.

Smaller scenic towns such as Boise City, ID, and Provo, UT as well as beach towns across Florida are seeing significant proportions of building permits relative to their size.

Builder confidence suggests that this trend could continue. Home builder sentiment is strong and up year-on-year, though dropping from its peak in November 2020.

The Gap Between Home Starts and Household Formations Continues to Widen

As discussed in the writeup the last time we examined the question of housing supply adequacy, 2012 to 2019 marked a period of economic expansion and prosperity. Right after the January 2020 research, the Coronavirus pandemic changed daily life worldwide. Being stuck at home led to a re-examination of home life, resulting in increased housing demand across the country. However, as housing demand ramped up, the construction industry ran into issues with material and labor scarcity, driving the cost of both inputs up and widening the already large gap between home construction and household formations. Housing demand was strong enough that these hang-ups did not stifle home sales growth, but these trends exacerbated the preexisting shortage, making the problem worse. 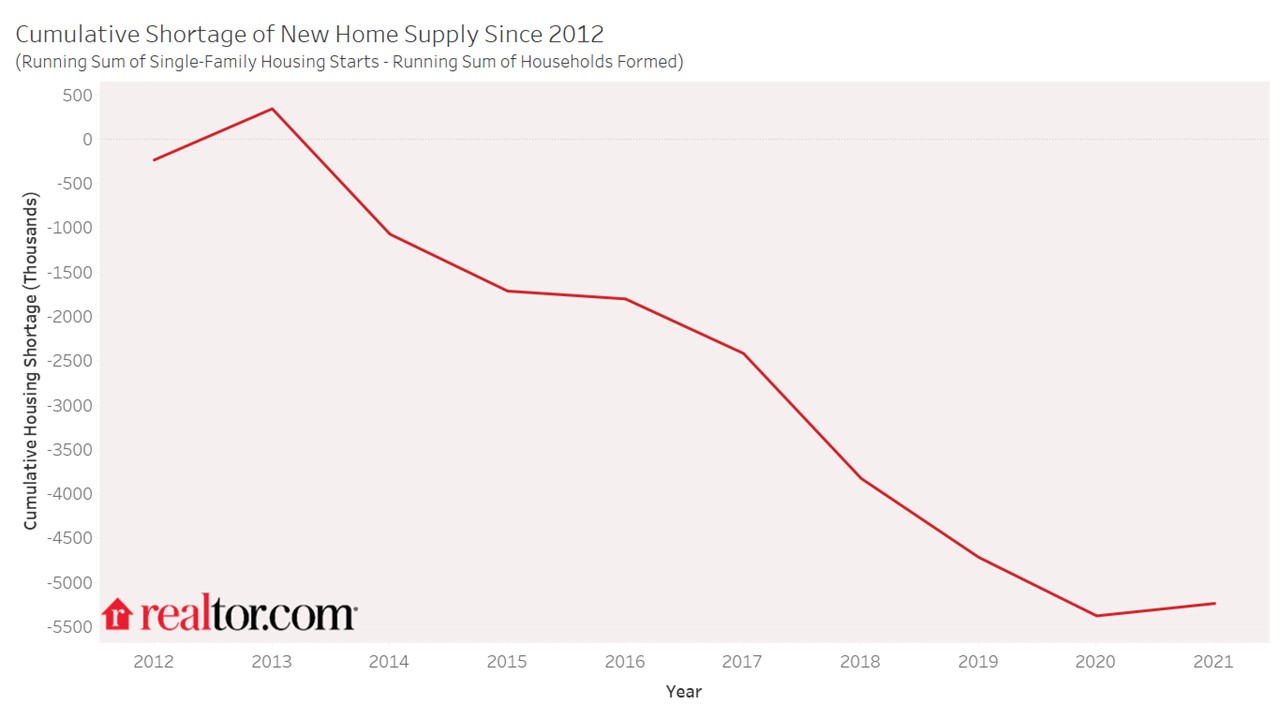 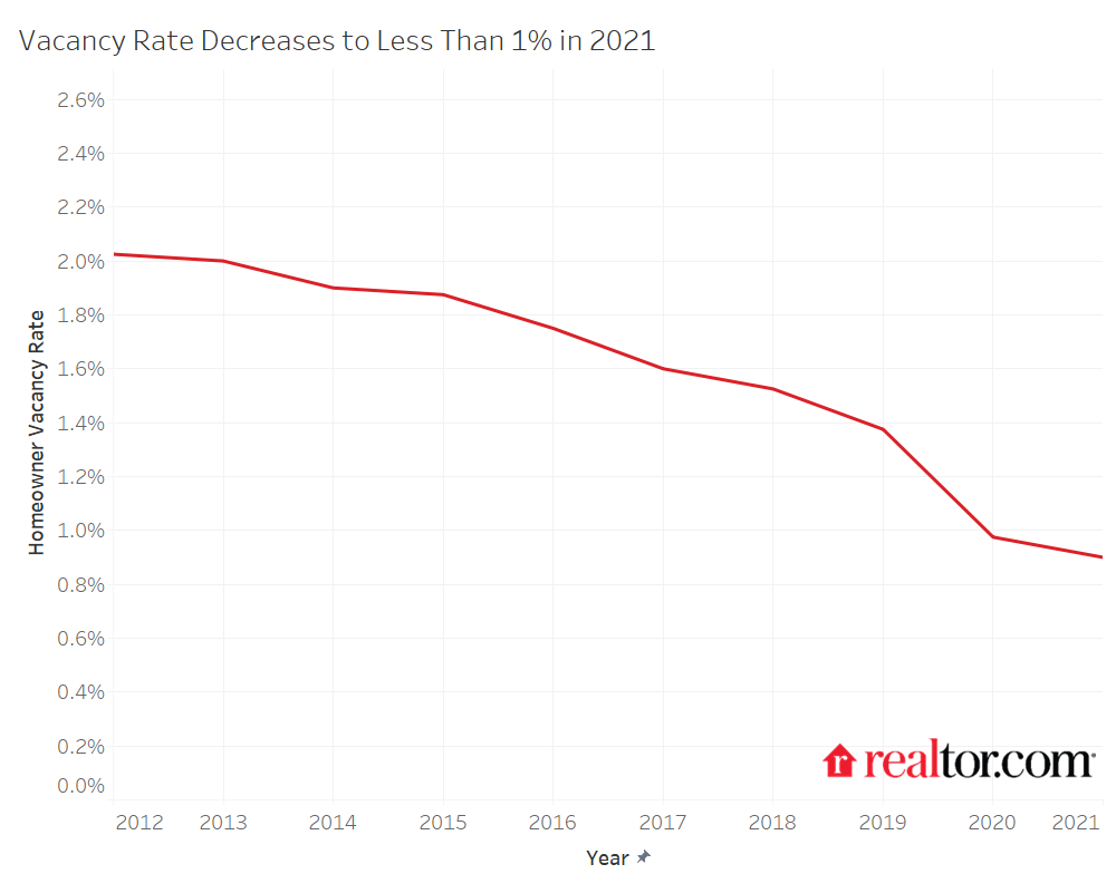 However, within the first 6 months of 2021, construction has started on 565,000 homes, which is about 57% of total housing starts for 2020, indicating home construction is accelerating slightly to catch up to demand.  Notably, if the pace of the first half of 2021 is sustained, this year will mark the first time since 2016 that home starts have outpaced household formations in a single year. Household formations are much lower than in recent years, but this trend may help housing supply begin to catch up.  However, new home sales data suggests that construction activity is not concentrated in affordable housing.  In both 2018 and 2019, 43% of new home sales were priced below $300,000.  However, in 2020, this figure dropped to 39% and through the first half of 2021, only about 32% of new homes have been sold for less than $300,000. 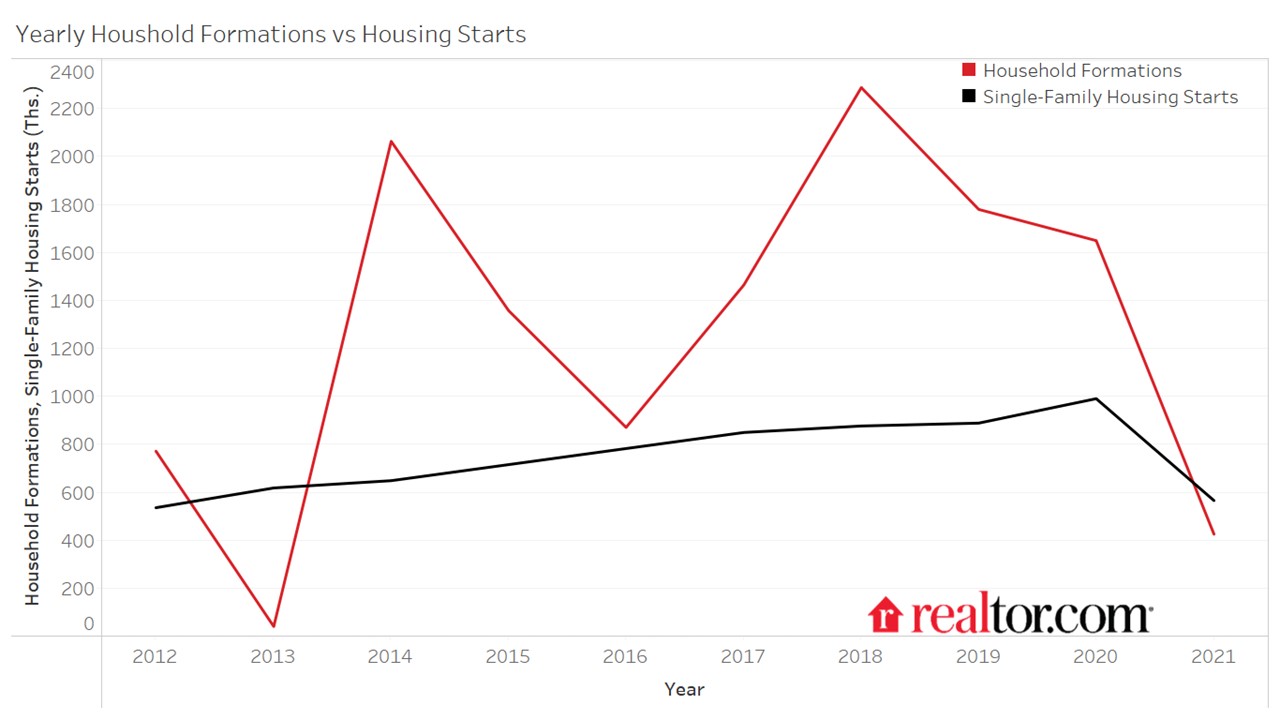 Building Permits Indicate Investment in the South and West

More than half of all housing starts in the first six months of 2021 were in the South. This trend is on track to continue as shown by the proportion of building permits granted in southern metro areas. In the first half of 2021, 13.8% of all building permits were granted in Dallas, Houston and Austin, Texas. Combined, these cities only make up 6.0% of the US population. The volume of permits relative to city size reveals that significant investment is going into growing cities such as Austin (TX), Nashville (TN), Raleigh (NC), Phoenix (AZ), Denver (CO) and Tampa (FL). The investments in real estate developments also reflect a noticeable consumer shift toward markets with higher quality of life, larger homes, strong economies and relative affordability. This trend away from coastal urban downtowns and toward suburban and mid-sized cities was also captured in our 2021 Hottest Zip Codes report. 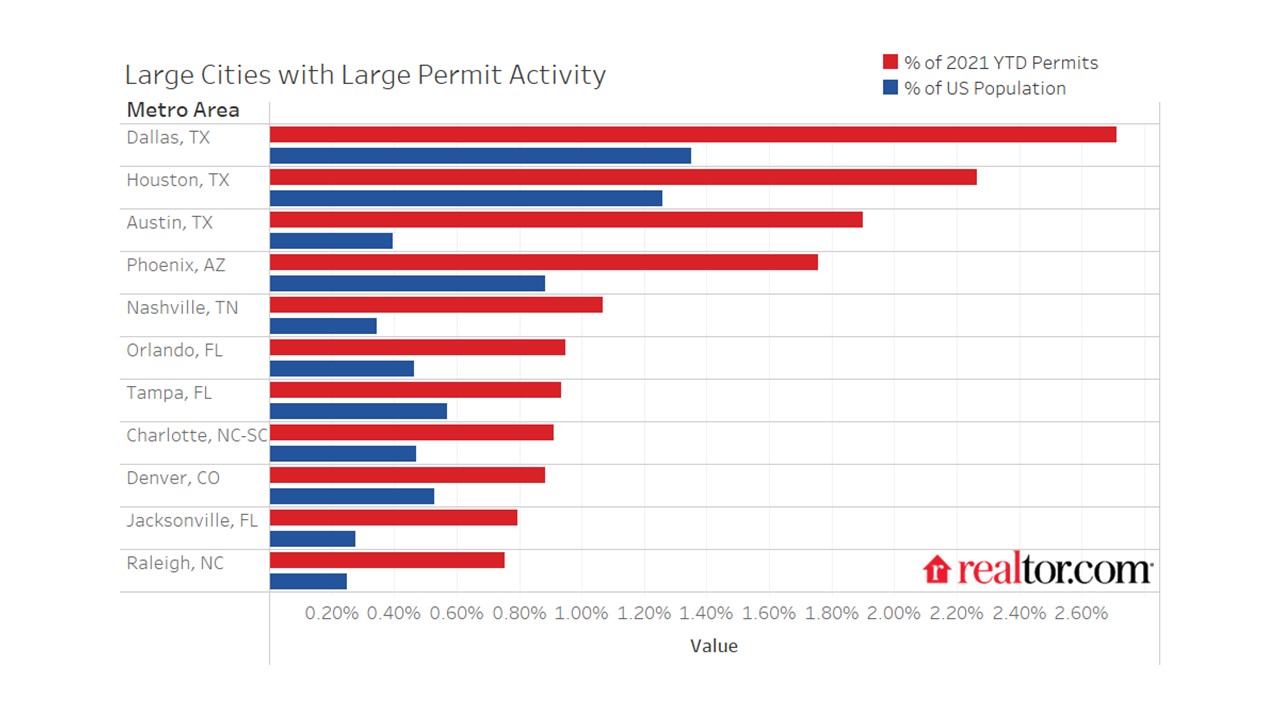 Interestingly, many smaller cities (<0.5% of US population) are seeing considerable investment relative to their size. Most of these smaller cities have the benefit of natural beauty, whether it be mountains (Boise City, ID, Provo, UT, Greeley, CO) or beach (many towns around Florida’s coast). 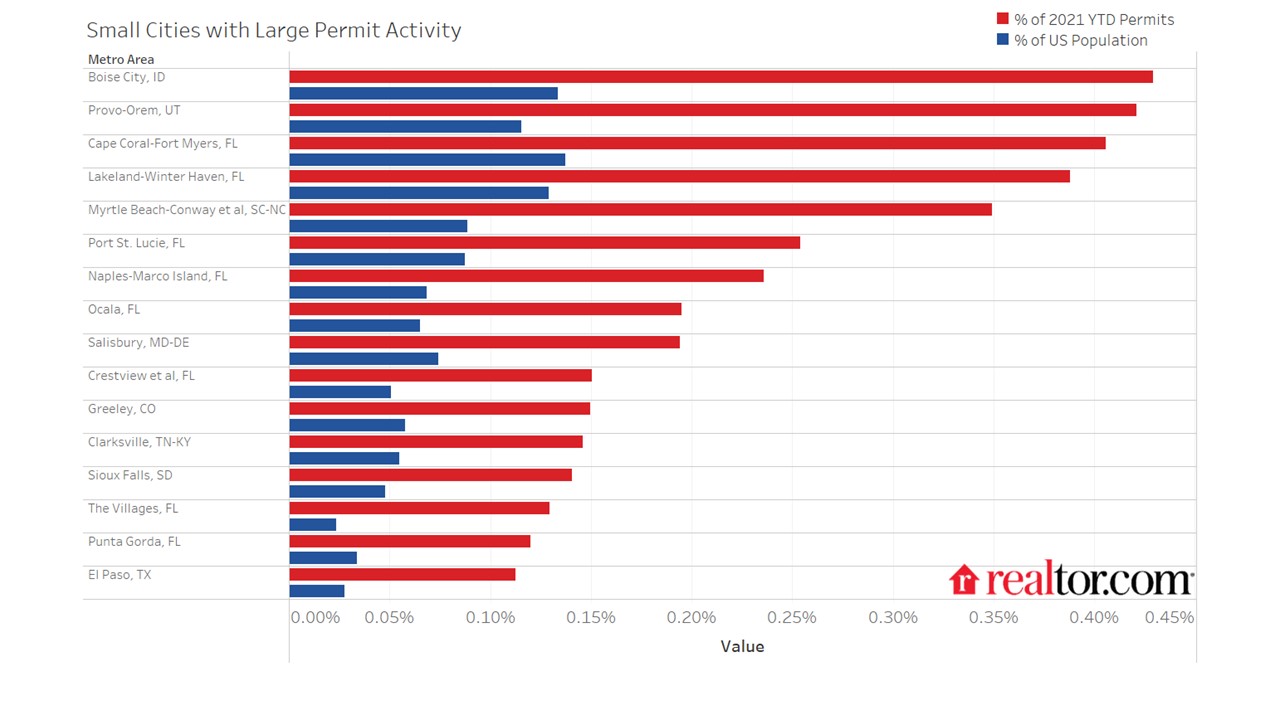 Overall, the market is looking strong for homebuyers, builders and sellers alike. Low household formation in 2021 is giving builders the opportunity to catch up to demand. The pandemic served as an opportunity for reflection, pushing many homebuyers towards larger homes in lower cost cities. Southern metro areas, as well as Denver and Phoenix are seeing especially high rates of construction and permitting, indicating growth in cities that offer lower cost of living and more space. 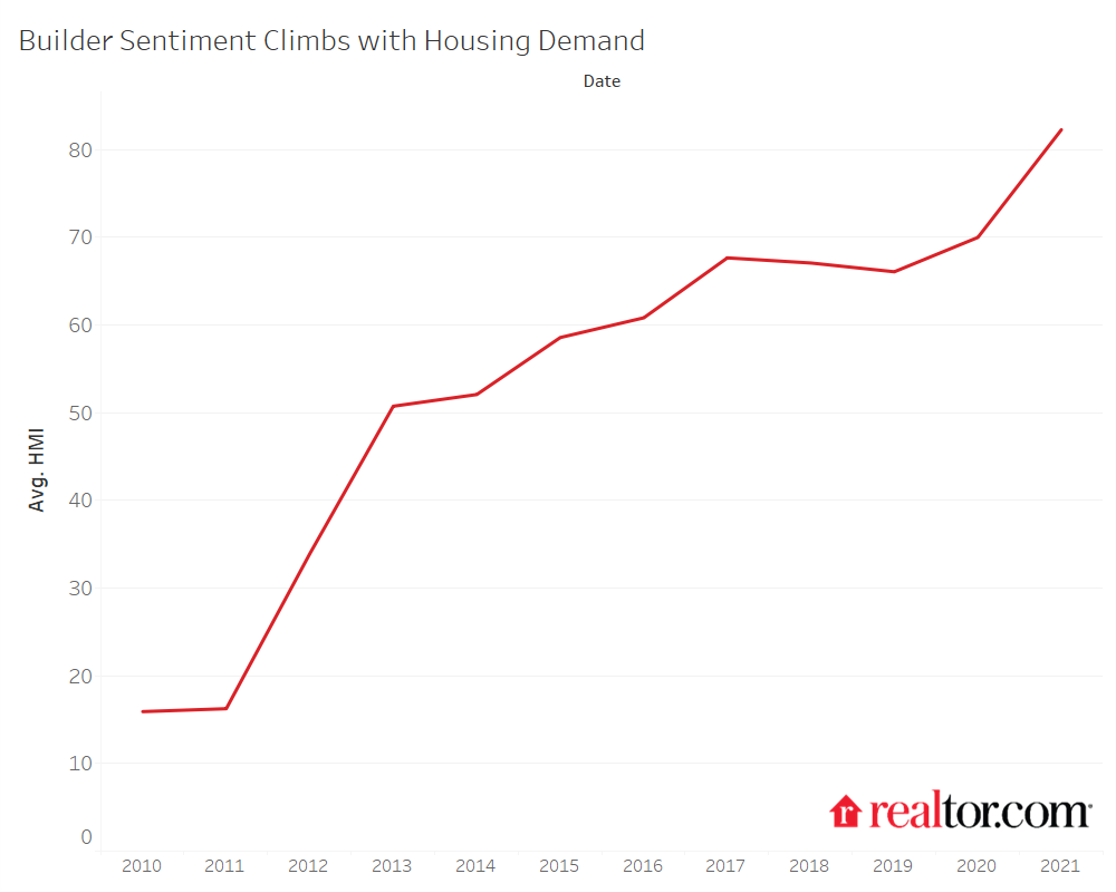 To arrive at yearly household formation, the increase in households between December in the previous year and the current year were calculated. This value was used as the number of household formations in the current year. Home starts, completions and permits refer to the total single-family homes metric in the Census construction data. HMI and vacancy data were pulled and displayed as stated in the data source.